Nigel Adkins, became the new Sheffield United manager 9 days ago. Fans we're pestering Jim Phipps (co chairman) on social media and Twitter was been refreshed at least every 5 seconds. But finally after that the announcement was made that proven promotion winning manager Nigel Adkins would take over the Blades at a press conference in London. Joined by Andy Crosby and Dean Wilkins, Adkins made it clear that he's determined that  this season he will  get the Blades into  the Championship. Adkins has promotions on his CV and is proven in League 1 having taken teams such as Scunthorpe and  Southampton up to the next level and i believe this is what got him the job, United want a proven manager that#s been their and got the t-shirt and this man certainly has once again a clear show of intent from our board prizing some of Nigel's calibre to a club. Nigel, is now known as 'positive Nigel' amongst the United fan base as his philosophy is  positive,exciting,thrilling football unlike his  predecessor 'negative Nigel Clough'. Blades fans have now been re galvanised by such a great appointment and are now looking forward to a thrilling season and ATTACKING FOOTBALL!! 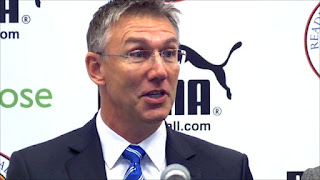