The Blades finished 2013 in winning ways. With a win against a poor Tranmere side.

The Blades stepped out on home soil for the last time in 2013. Going ahead after 9 minutes. With Baxter crossing in the corner and Murphy slotted home. The Blades continued to push for the 2nd, but couldn't find there way through. Then the Blades went forward and hit the crossbar and most of the ground thought it was over the line. Baxter continued to do well.

In the 2nd half the Blades came out, to try and extend their lead. Baxter and Porter stayed up top. Then in the 56th minute Doyle, switched the ball out to Porter on the right side and Porter cut it back for the incoming Baxter who slotted past Tranmere's keeper. Corner after Corner the Blades pushed for the third. And in the 67th minute it came, through Flynn. Baxter threaded it through to Murphy who cut it back for Flynn to slot home. 3-0 up and good times coming back. Then in the  85th minute Tranmere went up United's end and had a corner and Ash Taylor put the ball in the net 3-1. The Blades held on. 3-1 up to 17th.

My MOTM was Doyle. Broke up play and controlled us going forward. 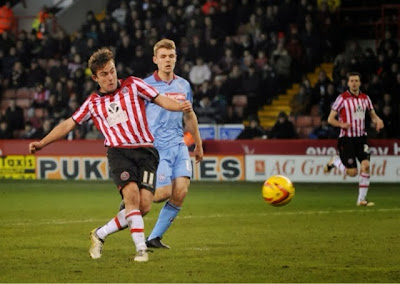