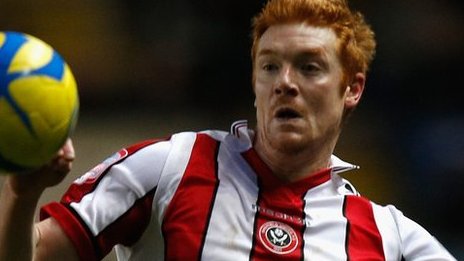 Sheffield United faced a struggling Colchester side and if the blades won the game they would go second in the league. The game started at 3pm and the starting eleven for the blades were: 4 Danny Higginbottom, 5 Harry Maguire, 7 Ryan Flynn, 8 Michael Doyle, 11 Kevin Macdonald, 14 Dave Kitson, 15 Neil Collins, 19 Barry Robson, 23 Jamie Murphy, 25 George Long and 29 Tony McMahon.
The game started with Colchester kicking off shooting towards the Kop. After the 3rd minute Colchester conceded a penalty because of a silly tackle in the box, Barry Robson got ready to take the penalty and blasted it into the left side of the net. A few minutes later Michael Doyle took a shot and hit the post. For the rest of the second half the blades were all over Colchester in possession.At the start of the second half the possession was quite even until the 73rd minute when out of the blue Kevin Macdonald shot on the edge of the box and rolled into the bottom left corner. Sheffield then made two substitutions within 10 minutes of each other, the first sub was new signing 19 year old Danny Poleon on for the first goal scorer Barry Robson and the second sub was Diago De Girolamo. Eventually on the 94th minute Diago De Girolamo shot but the keeper saved it and Kitson scored with the rebound.
The attendance was 16,860 Written by Jordan Hall