The Blades go into this weekend's lunch time kick off sitting 4th in the Championship table. Facing a Rotherham United side who sit 19th, 2 points behind United's steel city rivals Wednesday. Chris Wilder's men have drawn 2 of their last five games with only one win coming against Wigan in their 4-2 win. Rotherham meanwhile have done well at home and have one win in their last five with that coming against Swansea.

Manager Paul Warne has revitalised Rotherham's return to the Championship, impressive home form see's the Millers sitting 2 points above the drop zone but 3 points of 15th. The Millers have improved their home form this year which has helped them a lot. With important victories coming against top team's like Swansea and inform Derby, whilst also picking impressive draws against promotion chasing team's like Middlesbrough away from home. Rotherham's dangers come from mainly midfield with players like Joe Newell, Ryan Manning (on loan from QPR) and Will Vaulks. Manning, a young prodigy from QPR has been banging in the goals and has scored 4 goals in 15 games most coming from penalties. Impressive home form see's Rotherham fighting for survival and may help them stay up.

Chris Wilder's men if winning the game will go joint top up until the 3pm kick off's. Facing a tough schedule with a trip to London coming the week after to face Brentford it is difficult to see what kind of side Wilder will play. After the week of internationals it is expected that changes will be made by the self confessed Blade.

Team News
Sheffield United : The Blades are expected to have a fully fit squad to choose from. John Egan returned early this week from International duty with a suspected calf injury but is expected to be available for selection. No other injury concerns for the Blades.

Rotherham United:  Paul Warne is not expecting any fresh injury problems after his squad to like United's returned from the international break unscathed. Sean Raggett on loan from Norwich is expected to be fit soon as he's playing in a reserve game this week to. 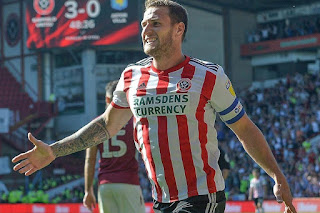 Image : Courtesy of Scottish Sun
Posted by Unknown at 06:13