Blades go top of the pile 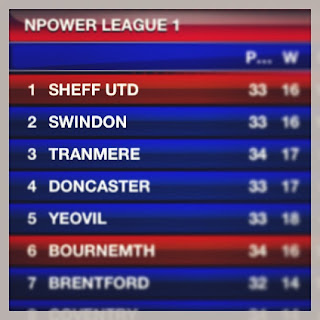 The Blades go top of the pile this weekend after beating Bournemouth in what was a tight game and the one to watch in league 1.With the Blades unchanged from Colchester,and Forte expected to be out for a couple of weeks they went into the game hoping that Forte wouldn't be missed. Wilson earlier said this week that the Blades need to fight to get were they want to be by the end of next season.

In the first half  straight away with United in their white kit,the Cheeries attacked an nearly scored with Long saving it. Then United came forward and Robson with a volley hit the crossbar on the edge of the box.Bournemouth continued to attack but couldn't find a way passed Harry and Collins.Higginbotham's header from a Doyle free kick was saved then Kitson won a free kick swung in by Flynn and a mistake by Painter lead it to MURPHY who slipped it pass the keeper. United held on to the edge of the half.

No changes for the Blades were made and they came out and pushed for a second, McDonald was the first to make a swipe who ran through a swarm of players but fired wide. Bournemouth challenged for a equalizer but couldn't find it. The Blades sat back and invited pressure but they couldn't finish it.Kitson was battling as all ways and kept winning free kicks. Robson came of for Poleon  who is yet to make and impact. Poleon chased every ball he could but couldn't but the ball in the net. Harry and Collins kept a clean sheet as well and the Blades go top into the Leyton Orient game this Tuesday.

Blades: Long, Higginbotham, Maguire, Flynn, Doyle, McDonald, Kitson, Collins, Robson (Poleon 84), Murphy, McMahon.
Unused: Westlake, Hill, Ironside, McFadzean, Coyne, De Girolamo.
Wilson thoughts :
"Our team's performance was excellent. We had to have the physicality today, we had to defend properly.
"But what pleased me more than anything was how we thought out our game-plan, there was some intelligent pressing all the way through.
"They didn't get through us virtually all afternoon. to come here and have that type of performance was terrific.
"Yes, we had to defend and yes, they had some possession, but it was all around the half-way line."
Also he said that Forte isn't expected to make the Orient game.