Giggs drives MUFC to 5th round

Ryan Giggs showed why Sir Alex was desperate to keep him at the club as long as he can. Manchester United went ahead after just 3minutes after Giggs scored a penalty after Hughes handled the ball from a Rooney corner. He slotted it in just past Schwarzer. Then United were dominating the first half and Rooney went close after spinning round in the 6 yard box and hitting the bar. Fulham sat back a lot and invited the pressure in the first half . Later Hernandez was played through but was ruled offside. Rooney was controlling the play from right to left and Ryan controlling it in the Midfield. Anderson was playing the thru balls tremendously through to Javier

United  came out rampant and Rooney put them ahead on the 50th min after dribbling pass two players and slotting home comfortably. 2 minutes later Javier was played through and finally scored after some intense pressure from Fulham Berbatov was no were to be seen and the defense were    controlled. Then Hernandez went ahead and got his 2nd when he was just their in the right time for a pull back from Wayne and finished. Fulham controlled the last 10mins and got a goal in the 77th from a header at the near post from Aron Hughes.
Sir Alex said after the game
"I'm really pleased that Wayne scored and that Chicha scored two because if I get those two and Robin [van Persie] into the twenty-plus goals mark, we're definitely in business," he told MUTV and ESPN after the match.
"We picked a very strong team because we didn't want to make any slip-ups. The FA Cup is an important trophy for us this season. We haven't won it for nearly 10 years.
"The players did well and it was quite comfortable. In the first half Fulham had a lot of possession and there were a couple of squeaky moments. But all in all it was a really good performance by us." 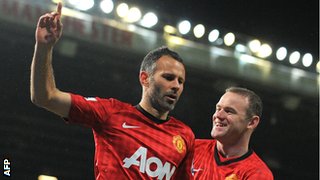