Robin Van Perfect
Robin Van Persie set Old Trafford alight yesterday  with his 15th goal this season against Sunderland. Manchester United who gain there 6 point lead back in-front of rivals Man city,really wanted to beat Sunderland after their fans cheered Man city when they Agureo scored that last minute goal Rooney who quoted this week "some of our players wont forget the sunderland fans who cheered that day". Wayne who scored his 8th goal of the season yesterday ran the Sunderland back line all over the place. Rooney and Robin have scored 9 goals in 4 this season in United premier league campaign this season. United who are unbeaten in 32 home games since Blackburn beat them 2-1 pressed and played magnificently with them whipping the passes all over the Old Trafford turf. The first goal came after 16 minutes where Van persie played it out on the right to Young he crossed it in to Robin who chested it down and shot into the right hand corner of Mignolet net. The second came after 19 minutes where Young passed it to Carrick back into midfieldwho threaded a beautiful weighted pass through to Cleverly who shot across goal and the keeper was beaten. HT 2-0  United came back out to a standing ovation dominated the second half  with David De Gea saving a deflected shot off Paul Scholes at the near post with  Sessegnon shooting. The 3rd goal came after 59 minutes where Ashley Young played in Van persie who flew passed Carlos Cuellar and passed across the goal to Wayne who slotted in to a empty net. Sunderland pressed and their goal finally came in the 72nd minute where ex red Frazier Campbell got a cross from Sessegnon and powered the header in at the back post. United now go to Swansea on Sunday at 1:30 confident  also Vidic came on in the 65th minute " A lot of our football was fantastic and some of our interchange play was terrific,” Sir Alex told MUTV. I don’t know if we relaxed when we went 3-0 up or if Sunderland got a grip of the game, but towards the end they played very well and could have scored two or three goals. “Some of our play was fantastic and we should’ve scored more. Tom Cleverley’s goal was a marvellous piece of interchange play, a first time finish and a really superb goal which epitomised the way we were playing at that point. I’d no complaints for an hour and it was wonderful to watch. “We don’t pick out Robin van Persie’s runs as well as we should - his movement is great and he kept them on the back foot. But Wayne could’ve scored three of four goals, he hit the bar and missed two or three chances in the first half. But he got one which is important as it keeps his run going.” 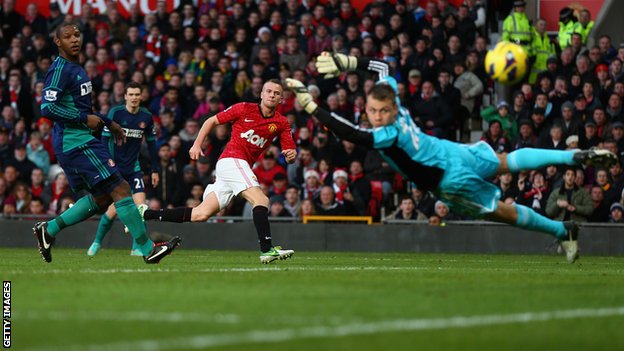